AB de Villiers is among an elite group of Indian Premier League (IPL) originals. He was there in 2008 and this weekend he will start his 14th season in the IPL.

De Villiers is comfortably a localized foreigner and no other foreign investment has ever enjoyed such support and loyalty from franchise owners. De Villiers, has played for the Royal Challengers Bangalore for the past 10 seasons, having started his IPL career with a four-year stint at the Delhi Daredevils.

The IPL auction process can be ruthless and, at times, inexplicable. Some players don’t get bought, some go for a bargain, as was the case with Australia’s Steve Smith in the most recent auction, and some command an astronomical price, as we experienced with South Africa’s Chris Morris.

But there have always been three consistent givens in any IPL auction and IPL season: Virat Kohli, MS Dhoni and AB de Villiers.

Kohli and De Villiers remain the biggest spectator attraction when at the crease for the Royal Challengers. There aren’t two better T20 batting specialists and when the two fire on the same night, it is game over.

The love for Kohli and Dhoni is expected, but it says everything about De Villiers the player and De Villiers the person that the Indian cricketing public have adopted him as one of their own.

You only have to spend some time on an Indian cricket social media page to understand the awe there is for De Villiers. He is an icon of the modern game and is affectionally dubbed Mr 360 because he can hit the ball in any direction.

He is also the batsman his colleagues and opponents regard as the most dangerous in the competition.

Kohli, in 2020, was asked to receive the Man of the Match award on behalf of De Villiers. Interviewer Mark Nicholas joked with Kohli and asked him to pretend he was De Villiers.

‘I wish I was AB de Villiers, to be honest,’ said Kohli in response. ‘I think he was coming off a long break. Some of the shots he played were outstanding. Good with the gloves as well. You speak with him and he keeps things simple. He doesn’t watch a lot of cricket, he enjoys his life, enjoys his golf and he comes out here relaxed and backs his ability.’

De Villiers had smashed 55 off 22 deliveries against the Rajasthan Royals, which included five sixes.

Former Indian opening batsman Virender Sehwag added his voice to the hundreds of social media De Villiers disciples with this gem: ‘Once a genius, always a genius. What a wonderful chase. IPL logo shot by him (De Villiers), no wonder the logo is like his pose.’

Within a second of Sehwag’s post, the first response was from an Indian cricket fan, who had woken at 3am in California, USA, to watch De Villiers bat.

#ABD was followed with A = Amazing B = Brilliant D = Dazzling.

De Villiers has charmed all of India (and the world) with a run-scoring response that is matched by his personality. He is without doubt the most famous non-Indian cricketer in India.

He is also one of the most loved and followed on social media. He has 13.5 million Instagram followers, which is more than there are users in South Africa. He is the most followed South African-based South African and he also has 7.6 million Twitter followers.

If De Villiers is big in South Africa, then he is colossal in India. He is a brand and he is superstar. He holds two positions in the top five for the highest individual scores, he has the fifth most half-centuries in IPL history (38), the fifth fastest century (43 balls), the second most sixes (235), the most fours in an innings (19) and the third highest strike rate in an innings (387.50).

His highest score is 133 (v Mumbai Indians), off just 59 balls, and in 2020, at age of 36, still managed 454 runs for the tournament, and in the past six seasons has scored in excess of 400 tournament runs on five occasions.

Age isn’t dulling his appetite for runs or his enthusiasm for the IPL.

‘I am as young as ever,’ De Villiers told the media on the eve of the tournament. ‘And as excited to do well.’

And age isn’t dulling anything about De Villiers’s appeal in India.

He remains the most popular player and the most dangerous every time he strides to the crease. 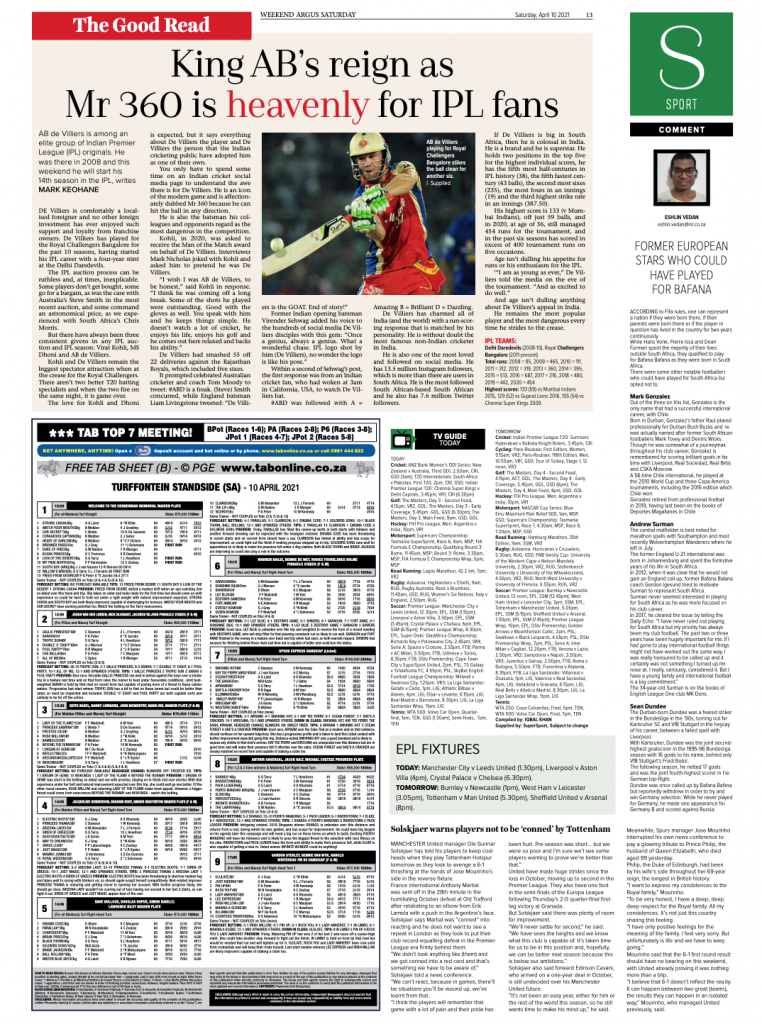