Kolisi’s Springboks have never won a Test in three starts with Gardner in charge. They lost to Argentina in Mendoza in 2018 and lost to the All Blacks in Pretoria in 2018 and controversially lost to England at Twickenham in 2018.

Gardner, since then, has not officiated a Test involving the Springboks.

There is history there with Gardner and Rassie Erasmus, as Erasmus was livid with Gardner’s officiating in the defeat against Argentina. He prepared a video the equal of the now famous Nic Berry video and sent it to Gardner, his boss and whoever else sees these things at World Rugby.

Gardner has never forgotten and he has never done any Erasmus coached team any favours.

Gardner screwed the Boks in the 12-11 defeat against England at Twickenham. England captain Owen Farrell should have been penalised and yellow carded for an illegal, no arms wrapped around tackle on Bok centre Andre Esterhuizen. Gardener, with one minute to play when the incident happened, refused to penalise Farrell and insisted he was comfortable that Farrell had done nothing illegal. The penalty would have been from 30 metres out from nearly in front of the posts.

A few days later Gardner publicly acknowledged he got the decision wrong, but it counted for little as the result couldn’t be changed.

SA RUGBY REPORTS: I GOT FARRELL TACKLE WRONG. IT SHOULD HAVE BEEN A PENALTY

Erasmus mocked Gardner’s decision by releasing a video coaching Esterhuizen to tackle illegally and high and without using his arms as a wrap around.

Erasmus, Springbok coach Jacques Nienaber and captain Kolisi know that they will be up against 16 when they play Scotland and for the Boks to win, they will have comprehensively have to be better than Scotland, and Kolisi is going to have to challenge Gardner when he gets it wrong, which he will. 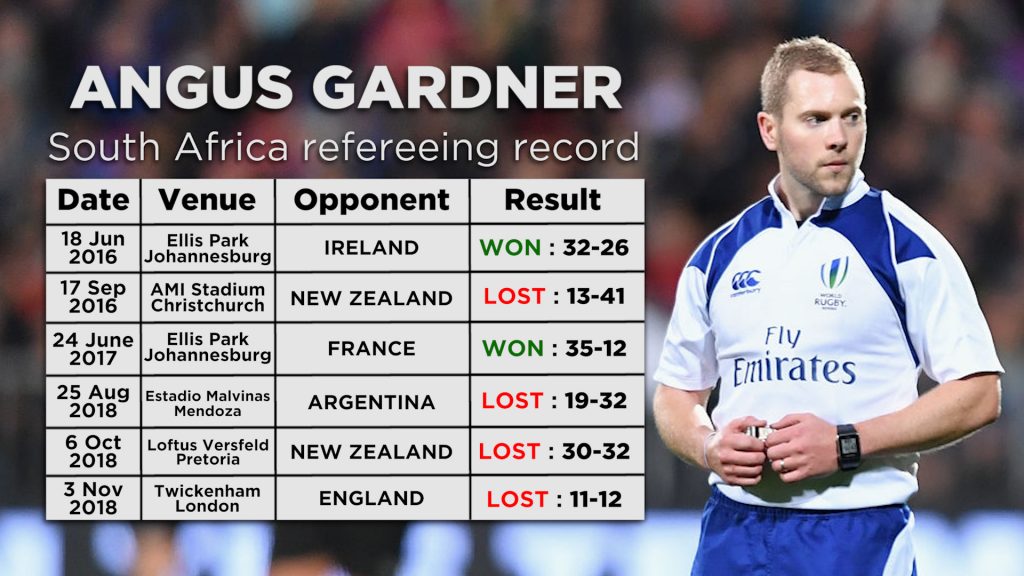 Kolisi will take centre stage and he must continue to stand tall, as he has done since the Lions series.

Kolisi’s charm to many in the international media was always his perceived shyness and an attitude the world rugby media often described as ‘respectful’ and ‘non-confrontational’.

Kolisi was the nice guy and referees ran roughshod over him.

It all changed in the British & Irish Lions series for Kolisi and the Springboks when 2019 World Cup-winning coach and National Director of Rugby Rassie Erasmus released a 62 minute video highlighting 26 instances of Australian referee Nic Berry getting it wrong against the Springboks.

Erasmus also emphasised, by way of clips, how Kolisi was disrespected and how Berry refused to entertain Kolisi as the captain of a national team.

Why did Kolisi, a World Cup-winning captain, not get the same respect as the Lions captain Alun Wyn Jones?

Whatever Berry’s reasons, the Siya Kolisi who fronted the media a day before the second Test and a day after Erasmus released the video, was a leader who had found his voice and used the media platform to speak his truth.

He said he felt disrespected and that his opponent was treated differently. Kolisi made it clear he would not tolerate it again and his Springboks would no longer be the nice guys who just sucked up every on-field decision that was blatantly incorrectly ruled against them.

Erasmus trusted Kolisi the player and the captain like no coach in South Africa ever has. He was insistent Kolisi was his No 1 choice as a flanker and his No 1 choice as the captain, and Erasmus’s belief also came packaged with a mentoring that included challenging the match officials with rugby science, meaning questioning on the basis of knowing the laws and highlighting that they had been incorrectly applied or interpreted.

This is what Kolisi has done with consistency ever since Berry did the dirty on him in the first Test against the Lions, and he has the full backing of his teammates, the Bok coach Jacques Nienaber and Erasmus, in his capacity as National Director of Rugby.

But no sooner has Kolisi stood tall, and he has been labelled ‘annoying’ and a leader suffering from a ‘persecution complex.’

‘A persecution complex revealed itself earlier this year, via Kolisi’s complaints of not receiving as much respect as Jones from the referee, while the Rassie Erasmus video only furthered that sense of perceived injustice,’ headlined Wales online. ‘At times, that ‘world against us’ mentality showed through from Kolisi as he struggled to get to grips with referee Paul Williams.’

The international media clearly liked Kolisi a lot more when he shut up, retreated and did what he was told to do by the referee.

They were in love with an apologetic Kolisi persona; not so the unapologetic leader of the Springboks.

Kolisi, in the Lions series, found his form and he found his voice. He has never led as magnificently as he has since that first Test and he is playing the best international rugby of his career.

The humility is still there in how he interacts with the media, but the confidence he is showing as a leader on the field is making referees very uncomfortable – and rightly so when he is applying his knowledge of the laws in his questioning.

It is not petulance, arrogance or the actions of a man with a persecution complex.

It is simply a leader of men, leading his men and doing so from the front.

Siya Kolisi has challenged referee prejudice and by doing so he is challenging a far greater social prejudice in rugby.