A very good cricketing mate of mine watched for a few minutes and then declared: ‘This oke can bat’.

And for anyone who doubted Devon Conway could bat, the South African-born and raised adopted Kiwi international smashed the ball to the boundary for his debut ODI century in just his third match.

Conway, who had been awarded a New Zealand national contract before he was even eligible to represent the Black Caps, has been the most talked and written about player in New Zealand’s domestic competitions for the past three seasons, and within two months of his international T20 and ODI debuts, he has transferred the talk to the national environment.

Conway blasted 127 against Bangladesh at his provincial home ground, the Basin Reserve, in Wellington and he did it with the freedom and confidence he has displayed ever since his first innings at the Basin Reserve.

Conway didn’t leave South Africa because of a lack of cricket opportunity. He wanted a new adventure and a new life and he hoped his cricket ability would be the catalyst to a sense of belonging.

Conway was just 25 when he told his partner Kim, during a round of golf at Johannesburg’s Huddle Park course, that he always wanted to live and play cricket in New Zealand. She encouraged him to take the plunge, but only if the two of them were all-in.

They sold their Bedfordview home, sold their car and bought two tickets to New Zealand.

Conway’s final first-class innings for Gauteng in the 2016/17 season was a then career best, scoring 205 at the Wanderers.

He must be using the same bat because ever since arriving in New Zealand the runs have flowed, with several centuries in all formats, a first-class career-best 324 not out, an international T20 average of 52 and a half century and century in two of his three ODI internationals.

Conway had sent his CV to Auckland and Wellington, but opted for Wellington on the advice of a South African cricketing friend (Malcolm Nofal) who was playing in Wellington.

‘He said Wellington is amazing, better than Cape Town,’ Conway said in a media interview with Stuff.co.nz. ‘I was ‘wow’, this is something I definitely want to do.’

He wanted another challenge and by his own admission he hadn’t scored enough runs in South Africa’s domestic competitions to warrant national Proteas selection.

‘I didn’t quite knock the doors down when I was playing in South Africa. It was my own fault, really.’

In New Zealand he hasn’t knocked down doors, he has blasted them open, and the reward has been similar to other South African-born and raised cricketers who sought something new in New Zealand.

Grant Elliot, famous for his 2015 World Cup-winning semi-final six off Dale Steyn at Eden Park, Auckland, had been in the South African first-class system for a decade before leaving. Black Caps fast bowler Neil Wagner was playing for the Titans but his opportunities were limited because Dale Steyn and Morne Morkel were the Titans new-ball pairing.

Kruger van Wyk, like Conway, had never seized the moment in South Africa, but had excelled in New Zealand.

Future Black Caps BJ Watling, Colin Munro and Glenn Phillips were all South African-born but they were youngsters when their families moved to New Zealand. It would be wrong to think of them as anything but Kiwis.

Not so Conway and Wagner. Their cricketing DNA will always be as much, if not more, South African than Kiwi, with Conway having as dramatic an impact on the shortened version of the game as Wagner has in the longer format. 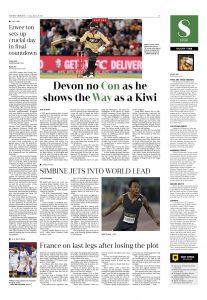