The ticket ballot for the British & Irish Lions eight match tour to South Africa opens in South Africa at 10am on 2nd September and South African residents will be the most advantaged. 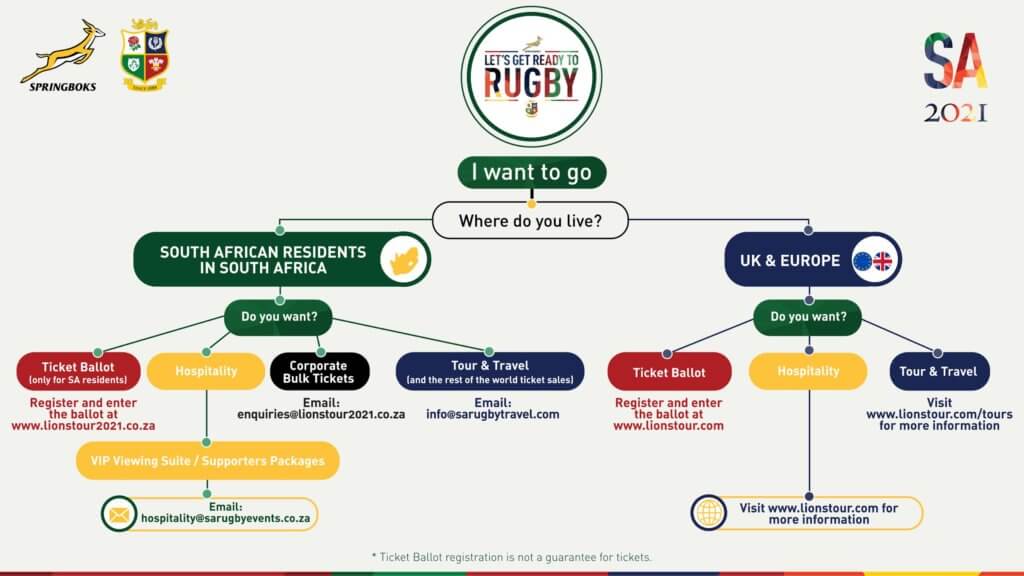 As per my IOL weekend article, I certainly believe South African rugby supporters have got the bargain of the century in ticket prices for the British & Irish Lions eight match tour to South Africa in 2021, when compared to other global major sporting events.

World Cup-winning Springbok Pieter-Steph du Toit described the visit of the Lions next year as being bigger than the World Cup because it is rare that a player gets a second career chance to front the tourists.

Springboks World Cup winning coach and National Director of Rugby Rassie Eramsus said playing the Lions was one of the greatest rugby experiences and pointed to the magnitude of the three-Test series, given that players from three of the four 2019 World Cup semi-finalists would take centre stage on three successive Saturdays.

‘It is going to be huge,’ said Erasmus, moments after his Springboks beat England to win the World Cup in Japan. ‘We are already counting down the days.’

Huge may even be an understatement because the Lions in South Africa will be the biggest sporting event in the country since the 2010 Fifa Soccer World Cup.

South Africa’s economy will also get a significant boost, temporary and permanent jobs will be created and sporting fans will get to experience the traditions of an eight-match rugby tour in a professional age dominated by one-off Test matches.

South African supporters have also been put in front of the queue when it comes to accessibility and affordability. The cheapest tickets are category D tickets and these have been made exclusive to South African residents.

The top end Test match ticket is priced at R3000 but these tickets invariably are at a premium to corporates and are snapped up quickly. The world champion Springboks plays the best of England, Wales, Ireland and Scotland, with the series representing a repeat in many ways of the Springboks’ 2019 World Cup semi-final win against Wales and final victory against England. A premium ticket to the Springboks play-off matches in Japan cost R16 000.

There will never be agreement that any sporting ticket is fair because demand, in the biggest sporting occasions, always exceeds supply. However, in the context of the British & Irish Lions visit to South Africa in July, 2021, there has never been a fairer system introduced to accommodate South African supporters.

The radical four-tier ticket sales system is an overall of previous systems and it speaks to affordability, in the context of the event.

The use of the word ‘affordability’ should not be confused with insensitivity to the current economic crisis in South Africa caused by Covid-19, but must be understood to represent how it speaks to how little it could actually cost to see the Lions play in South Africa in 2021.

The Springboks and Lions three Test matches could sell out three times over, when the travelling Lions supporters are added to the equation. That is the appeal of the occasion. The greatest challenge for the tour organisers was how to make the Lions accessible to all of South Africa outside of the Test matches and affordable within the context of the four-tier ticket price.

The Lions are unique in that they tour South Africa only once every 12 years. Many Springboks have won World Cup medals and played in several World Cups but never got to play the Lions. For those regional and provincial players outside the Springboks squad, playing the Lions is a once in a career opportunity.

SA Rugby CE Jurie Roux, when confirming the ticket prices, earlier in the week stressed that despite the unique commercial collaboration between SA Rugby and the Lions, South Africa was very much the host nation and the ticketing structure was geared towards ensuring this home ground advantage among supporters.

Tickets for the two midweek matches in Port Elizabeth and at the Mbombela Stadium in Nelspruit start at R100 – and these tickets are exclusive to South African residents.

Tickets can’t be purchased at stadiums or through traditional outlets and are only available by entering the ballot on www.lionstour2021.co.za 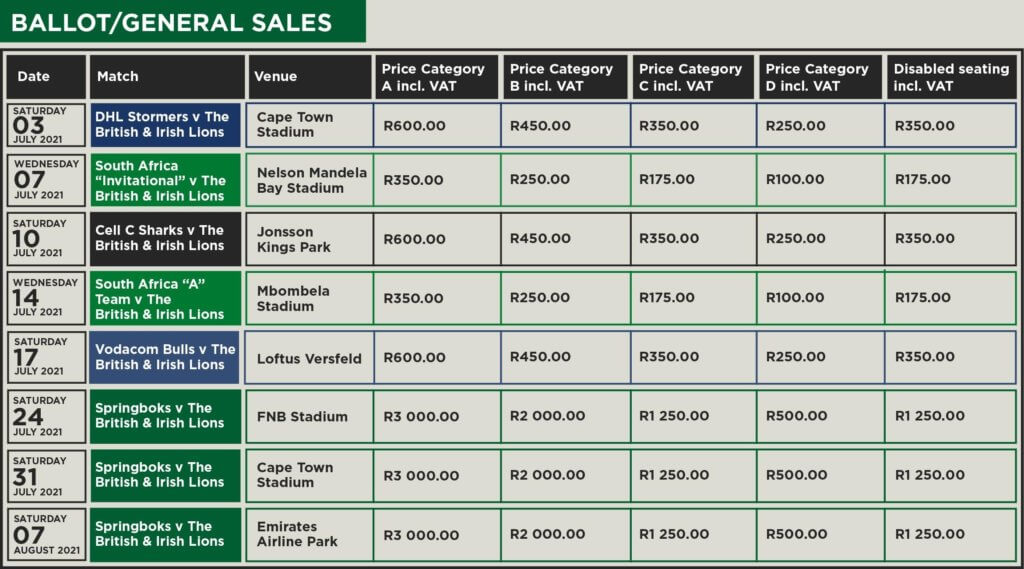