Manchester United’s Marcus Rashford became only the second player in the club’s history after manager Ole Gunnar Solskjaer to score a hat rick as a substitute.

Rashford scored three goals in just 18 minutes at Old Trafford in the Champions League 5-0 win against RB Leipzig, but what gave Rashford even more satisfaction than his on-field heroics was that more than a million people had signed his petition for the government to provide free meals to every child at school.

Rashford this year has made it his mission to ensure children don’t go hungry, and in the past few weeks thousands of cafés, local businesses and restaurants in the United Kingdom have contributed to free school meals. 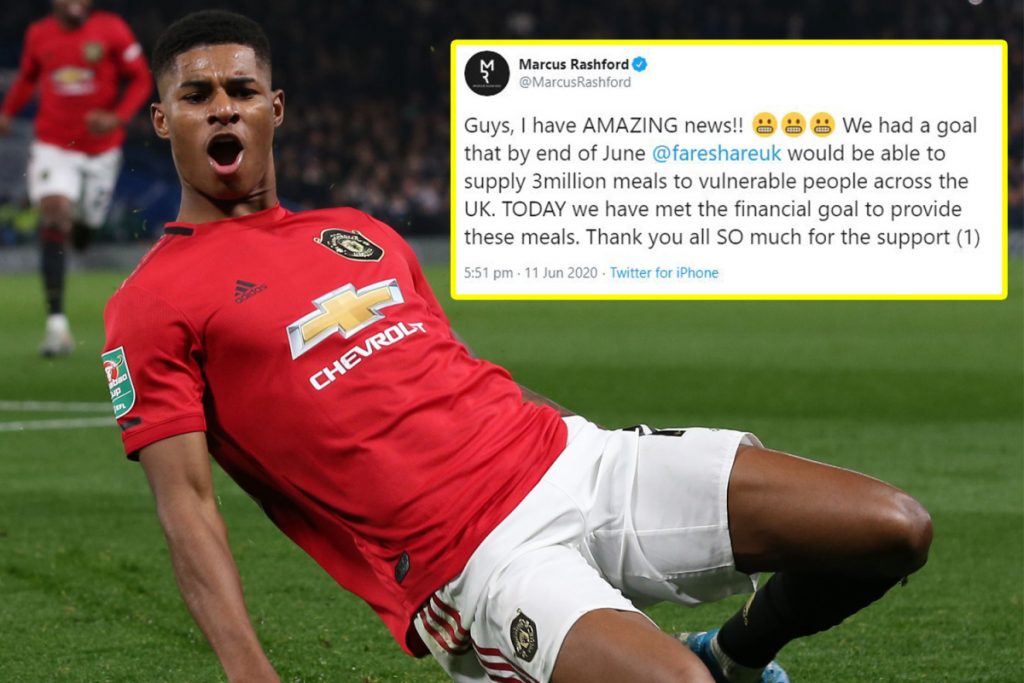 Rashford’s fight against poverty isn’t confined to the classroom. His biggest concern is for those children who don’t get access to regular meals when they aren’t at school, and his biggest supporter is his 89 year-old great-great grandmother Flo Osborne, who bakes pies to feed children.

Rashford’s on-going efforts saw him honoured with an MBE, but he insisted all that mattered to him was that another child would get a meal if the plight of poverty was at the forefront of everyone’s social consciousness.

Anderton Park Primary is just one of many schools in the United Kingdom who are recognizing Rashford as being much more than a brilliant soccer player. The school’s leadership, according to the Guardian Newspaper, asked its pupils to vote to name a classroom after someone whose values, humanity and achievements make them an enduring inspiration to children.

The school has rooms named after Michelle Obama and Muhammad Ali. Now Rashford’s name is up there with US civil rights activist Rosa Parks.

This is how the children described him: ‘Marcus is determined, polite, thoughtful, does not show off, which is why we like him so much. He does not give up. He inspires us to be great citizens and use our voices calmly and firmly. He loves his mum and knows he wouldn’t be where he is today without her strength.’

In a world of contradictions and hypocrisy, what an amazingly powerful compliment for Rashford, who like many of the children, was also a child who required free school meals because of his family’s struggles.

Sports people and celebrities have such powerful social media platforms, yet so few use this influence to inspire change and to put food on a plate for a child.

Compare what the footballer is doing, with his global reach, to what someone like Kim Kardashian did in the last week. The latter spent a million dollars on her 40th birthday and then boasted about flying her inner circle of people to a private island where they could ‘pretend things were normal just for a brief moment in time’.

Kardashian was lashed on social media for being tone deaf, insensitive and inappropriate.

‘We danced, rode bikes, swam near whales, kayaked, watched a movie on the beach and so much more. I realize that for most people, this is something that is so far out of reach right now, so in moments like these, I am humbly reminded of how privileged my life is,’ was among her posts.

If it is humility we are talking about, then read Rashford’s posts. The million he wrote about was the petition signature numbers and the other million was how many children had already been fed this year through free meals.

Those children who named a class room after Rashford, wrote of his authenticity, which, like humility, are not words you’d ever associate with the Kardashians.

We live in a world of opposites but thank goodness there is still a Marcus Rashford who is humbled enough to want to fight poverty and not ‘humbled’ because of privilege that comes with spending 1 million dollars on a 40th birthday.