My magical Madiba moment came in 2006 when I was privileged to be part of a historic SA Rugby Magazine cover shoot at his Houghton Residence, featuring Nelson Mandela in a Springboks blazer for the first and only time.

I was also privileged to write the cover story on how Mandela saved the Springbok emblem because he felt it could represent unity for a new generation.
This cover has particular resonance when I look at the most powerful images of Siya Kolisi hoisting the World Cup trophy in Japan 13 years after the SA Rugby Magazine iconic Madiba cover shoot.

So as we celebrate Mandela Day, take a look back at the cover feature from the June 2006 issue of SA Rugby magazine, which I feel so privileged to have written, and how the historic photo-moment came about.

“Once synonymous with oppression and apartheid, the actions of former president Nelson Mandela gave the Springbok emblem new meaning to all South Africans, wrote MARK KEOHANE in a 100-year anniversary article in 2006.”

How the iconic photo came about:

Thanks to Zelda La Grange and Anne Lee Murray, SA Rugby magazine featured Madiba on the cover in a Springboks blazer in 2006 to celebrate 100 years of the Springboks.

The shoot featured captain John Smit and coach Jake White and Keohane wrote the cover feature. It was done at his Houghton residence and the only ones in attendance were La Grange, Murray, Keohane, White, Smit, Madiba and the photographer.

Madiba had never before been photographed in a Bok blazer and never again did it happen. He put on the blazer, did the shoot, the blazer went off and straight into the Madiba Museum.

It is an iconic rugby cover … a world exclusive and a world rugby first when it came to Madiba. 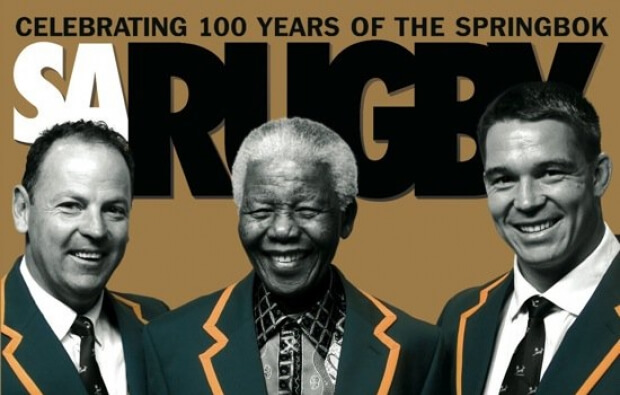 Here is the full feature below: The legend of the Springbok emblem has been described as similar to that of the game of rugby itself. Rugby’s romance is in a boy who picked up the soccer ball and ran with it at a school named Rugby. His name was William Webb Ellis, and folklore has it that is how rugby was first played. Historians say otherwise.

The same is true of the Springbok emblem. The romantics talk of the touring South African rugby team in the United Kingdom having spotted a herd of Springbok at a London zoo in 1906. They suggested to their captain Paul Roos that they call themselves the Springboks. And Roos announced to the English media later on that his team was the ‘Springbokken’. Historians say otherwise.

Where you will get consistency, with legend and historical record, is in the controversy associated with the Springbok emblem for the majority of its 100 years. This year [2006], South Africans celebrate the Springbok as a symbol of excellence, representative of a united South Africa in which every player, regardless of colour, has the opportunity to wear this badge. This year, the rugby Springbok is 100 years old, but for nearly a century the badge, depending on who you speak to, was viewed with as much horror as honour. In its 100th year, it has never been stronger and with the protection of the king protea that sits comfortably as its minder, it has never been safer.

Nelson Mandela, alleged political sinner in the 1960s because of his fight against injustice and apartheid, is the saviour of rugby in this country. He is also the reason the national rugby team still wears the Springbok as an emblem and maintains a global identity as the Springboks.

It was Mandela who famously wore a Springbok supporter’s cap at a youth rally on the eve of South Africa’s 1995 World Cup semi-final against France in Durban. He told a stunned crowd that the team playing the next day represented a nation and not a white minority. They are our boys, he said.

A week later, Mandela won the final for South Africa before kick-off by wearing a replica Francois Pienaar No 6 Springbok jersey.

And for the purposes of honouring the survival of the Springbok, as a symbol of hope and not necessarily oppression, it was again the former president of South Africa who accepted a Springbok blazer in recognition of his efforts to unite a country and opened his doors to our cameras to record this historic moment.

In April 2006, Mandela’s gesture in a room of seven people, including himself, was as significant to the longevity of the Springbok emblem in rugby as the statement he made on World Cup final day in 1995 when he freed the Springbok as a symbol exclusive to oppression and apartheid.

Mandela, in 1995, was criticised for putting on the jersey worshipped by the architects of black oppression, but he believed the symbolism would unite the two worlds in his country and force black and white to look in one direction.

Desmond Tutu, global opponent of apartheid and at the time equally opposed to the Springbok emblem, described Mandela’s action as profound and not offensive to the fight against apartheid.

In an interview with the BBC’s John Carlin, Tutu said, ‘I believe that that was a defining moment in the life of our country. He [Mandela] has a knack of doing just the right thing and being able to carry it off with aplomb.

‘They say some other political leader, head of state, if they had tried to do something like he did, they would fall flat on their face, as it were. But it was just the right thing. This sport being so white and really so Afrikaner. And with everybody baying for the Springbok emblem to be destroyed, and that he should come out wearing a Springbok jersey … it was an electric moment.

‘It’s not anything that you can contrive … it was quite amazing how many of those who were present would have been white, mainly Afrikaner, who had known this man to be a terrorist, that the government had done one of the stupidest things to have released him, and to have them yelling, “Nelson, Nelson, Nelson.”

‘Quite unbelievable. It had the effect of just turning round our country … it is unbelievable that when we won, people could be dancing in Soweto. If you had predicted that is something that was going to be happening in 1995, most people would have said, “I think you are crazy. You have been sitting in the South African sun too long, and it’s affected your brain.” But the incredible transformation, really a metamorphosis, was an extraordinary thing. It said it is actually possible for us to become one nation.’

Mandela’s act gave life to the battered animal, but it took more than just wearing a Bok jersey to ensure the animal continued to survive. There was division in opinion and intense debate about the right of the Springbok to live alongside democracy. Once again it was Mandela who convinced those opposed to the emblem that it had a place in the future of the country and that it could offer the new generation of South Africans a different meaning. Many felt it should have been buried with the skeletons of apartheid. Mandela was not among them. And he had good company in Tutu, who is now a believer that the emblem speaks of hope and not horror.

Tutu also wore the Bok jersey to emphasise the point that the emblem had a different association in a unified and democratic South Africa. He has worn it many times since.

In an interview in the latter part of the 1995, he defended his wearing of the Bok jersey.

‘I did not expect this, but I am proud to wear it when a few years ago, even a few months ago, it was anathema. I try to say what I believe is true and this thing, that was a very divisive and ugly symbol, could in fact have been magically used by God to weld us together. No one of us could ever in their wildest dreams have been able to predict that rugby could have this magical effect.’

Mandela then challenged the National Sports Council, which initially favoured making the king protea the only accepted emblem on all national sports teams, to reconsider the decision when it came to rugby.

‘There is a real possibility that if we review our decision and accept the Springbok for rugby as our symbol, we will unite our country as never before,’ he said.

The NSC approved the Springbok as a symbol of national unity in rugby in March 1996, 90 years after a South African rugby team had first worn the emblem in an international match.

It has taken 100 years for the emblem to be desired by every young boy with aspirations of playing rugby for the Springboks, Springbokke or Amabokoboko, as the Sowetan newspaper described the victorious Boks in the 1995 World Cup. Many believe the newspaper’s acknowledgement of the Springboks’ achievement Africanised the team for the first time, and the headline, conceived by subeditor Sy Makaringe and passed by editor Aggrey Klaaste, stands in significance alongside Nelson Mandela’s decision to wear the jersey to the 1995 final.

Today, 100 years after a South African team first wore the Springbok emblem on their rugby jersey, an entire nation associates the emblem with rugby and not social privilege or injustice.

By calling the Springboks the Amabokoboko there was an acknowledgement that the emblem was about a rugby team and not a political history. One hundred years after a South African team played with the emblem on the jersey, it is rugby that is being celebrated and not the justification of an emblem that previously represented so many different things for so many people.

Pictured below is my photograph with Mr Mandela, taken on the special day 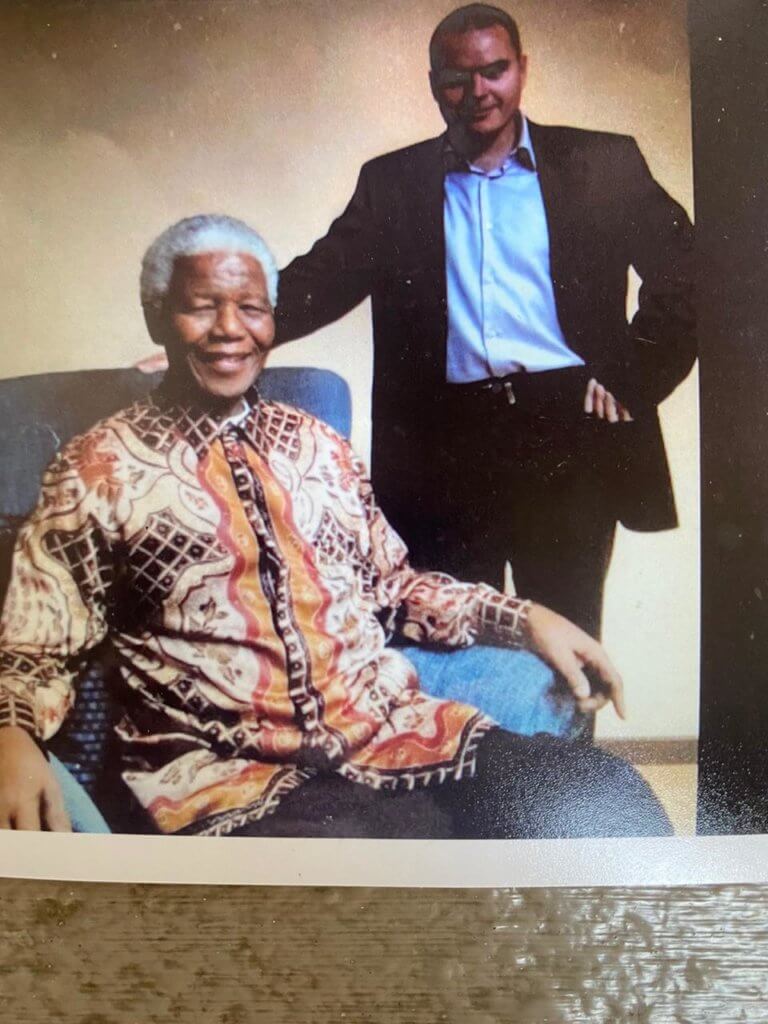