It was two big statement victories Down Under for the Rugby Championship with Dave Rennie’s Australia in a remarkable win against England and the All Blacks blitzing Ireland, writes Mark Keohane. It was also a timely two fingered salute for those of us who have dismissed Super Rugby Pacifica as more basketball than rugby.

The All Blacks were first up at Eden Park and after a nervous start they destroyed Ireland with a 15 minute cameo at the back-end of the first half.

Ireland looked so good for the first 20 minutes and finished strongly but the big moments at Eden Park all belonged to the All Blacks in a fantastic Test match. 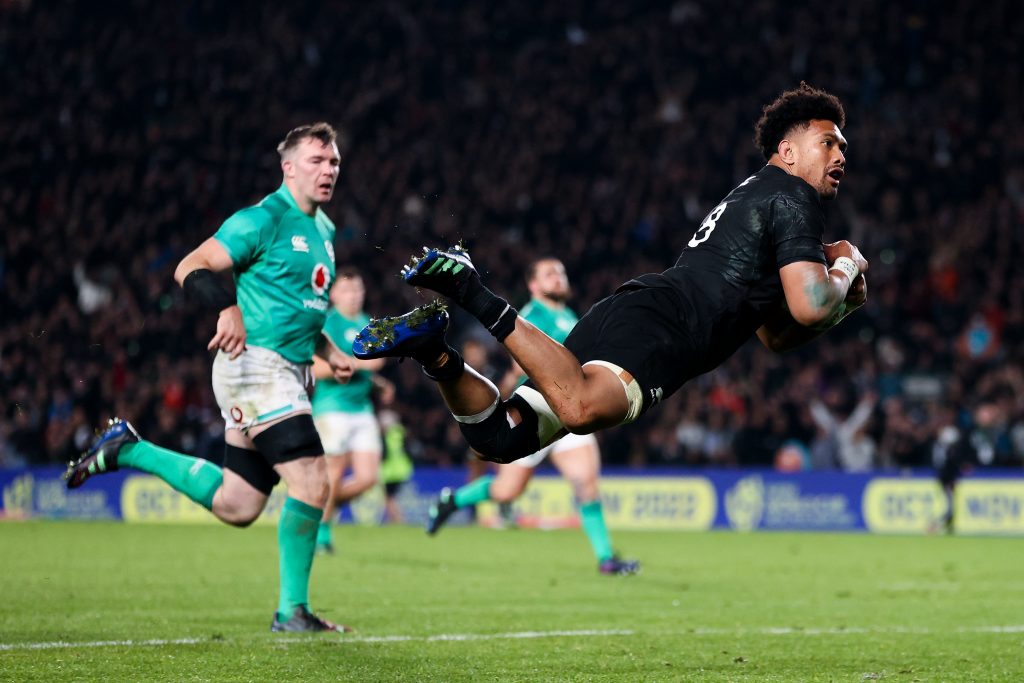 In Perth, at the Optus Stadium, the Wallabies defied every odd to end an eight-match losing streak to England coach Eddie Jones, who previously had also coached the Wallabies.

The Perth Test made for compelling viewing, with Australia losing veteran flyhalf Quade Cooper 10 minutes before kick-off to injury in the warm-up, losing their fullback early on, losing their tighthead prop and then having their lock red carded just before half-time.

Somehow, the Aussies managed to lead 9-6 early in the second half, but when England scored the opening try and Owen Farrell kicked a penalty, it looked all England at 14-9, with 30 minutes to go and with 15 playing 14.

I had to eat humble pie a year ago when dismissing the heartbeat of these Wallabies, but under Dave Rennie they have certainly developed a hardened edge at home. They were disappointing against the All Blacks in New Zealand in 2021 and even more disappointing in losing all three Tests up north in November.

A great win for the 14-man @wallabies against @EnglandRugby! pic.twitter.com/Ewx9MzxqzM

But in Perth on Saturday they showed the mongrel and fight that won them a home series against France in 2021, when they also played the deciding Test with a one player disadvantage. They were also outstanding in beating the Springboks in successive Tests in Australia. They won ugly in the first one and majestically in the second.

HOW I GOT IT WRONG IN PICKING ENGLAND TO WIN

Watch – @mark_keohane and @Zels77 predict a win for Eddie Jones' @EnglandRugby when they take on the @wallabies in Perth on Saturday. pic.twitter.com/QoEz0Q9RFq

I knew they would be competitive against England, but didn’t expect them to win. Not in Perth.

I had the English to take it quite comfortably as I didn’t think Australia had a pack that could match the English. When they were reduced to 14, I was even more convinced.

But thankfully sport often doesn’t follow a script and the Wallabies produced a magical try-scoring moment to take the lead at 16-14 and then enjoyed the luxury of 14 playing 14 after England No 8 Billy Vunipola was yellow-carded for a tackle to the head of Wallabies captain Michael Hooper,

The Australians enjoyed it so much that they scored two unanswered tries to lead 30-16 with two minutes to play.

England had the advantage restored to 15 on 14 in the final two minutes and then 15 on 13 before the final whistle and scored two quick-fire converted tries. It made for a respectful 30-28 scoreboard but for the English there was little respectful about the result.

This one will hurt Jones.

For the Wallabies, two points or twenty? It didn’t matter. They just wanted one more point than England and they got it on an evening in which they made a point that they will be no soft touch in the Rugby Championship, especially in Australia when they play the Springboks twice.

The All Blacks also improved on their awful end to 2021 and were physically superior to the Irish. They were lethal when given counter attacking opportunities and for 80-plus minutes showed a desire to defend their try line.

HOW I GOT IT RIGHT IN PICKING THE ALL BLACKS TO WIN.

The team expects the @AllBlacks to claim a win in their opening Test against @IrishRugby at Eden Park on Saturday. pic.twitter.com/tseuLFZEuz

It made for riveting viewing and a spectacular start to a month of Test rugby that feels like a mini-World Cup.

Only, this feels even better because this month is about a three-Test series in New Zealand, in Australia and in South Africa, who host Wales.

Saturday made for super viewing and we get to watch it all unfold again in seven days.