SA Rugby and the British & Irish Lions have nailed it with a four-tier ticketing structure that will make the Lions eight match tour to South Africa in 2021 accessible and affordable.

Primary to the ticketing structure is the well-being of South African and Springbok supporters and the majority of tickets will be available to residents of South Africa, living in South Africa.

Everyone, including those resident in South Africa, have to register ticket purchase interest through the ballot at www.lionstour2021.co.za, which opens on 2nd September and closes on 16th September.

Ticket prices for the three Test series range from R500 to R3000, the three matches involving Super Rugby teams are priced between R250 and R600 and the two midweek matches will be as affordable as R100 per person.

The Lions play eight matches in South Africa, with the opener against the DHL Stormers on 3rd July, 2021 and the final match the third Test against the Springboks in Johannesburg on 7th August.

“The top priced tickets are comparable with what was charged 12 years ago when the Lions were last here,” said Jurie Roux, SA Rugby CEO.

Roux addressed the media on Tuesday to explain the four-tier pricing, the hospitality model and also the reason for a ticket interest ballot registration.

“What is very different is that we have introduced four tiers of pricing for all matches – unlike the once-price-fits-all approach last time around. We have provided a range of price points for the public and, for instance, a family of four will be able to watch a match against one of the franchise teams for R1 000 in total, and for as little as R400 for a match in PE or Nelspruit,’’ said Roux, who also stressed that the affordability and accessibility had to be counterbalanced with a top end ticket pricing.

“This is a once-in-a-decade commercial opportunity and we won’t shy away from acknowledging that we have to maximise the commercial opportunity that the extraordinary demand offers. At the same time, we have been sensitive to the South African fans and have some very affordable prices to watch the best of our local teams take on the Lions.”

Roux said that while there was a collaboration between the Lions and SA Rugby in the operational and commercial structure of the tour, South Africa was still the host nation.

“This is the home of the Rugby World Cup champions, the Springboks, and the Lions will know they are in our den. More tickets will be available to home fans than to overseas fans – we want to meet them with an Army of Green to combat the Sea of Red,” said Roux, who cautioned rugby supporters against illegal ticket sales.

Roux reiterated that tickets would not be available at match venues, through provincial unions or at the usual retails outlets and if anyone answered an online advertisement for Lions tickets, they were in danger of being defrauded, exploited and ticketless.

“We know demand will massively outstrip supply – particularly for the Test matches,” he said. “We chose the ballot system to allow everyone to get to the start line. It is a randomised,

computerised selection system to ensure fairness, but people may be disappointed if they don’t register for the ballot.” 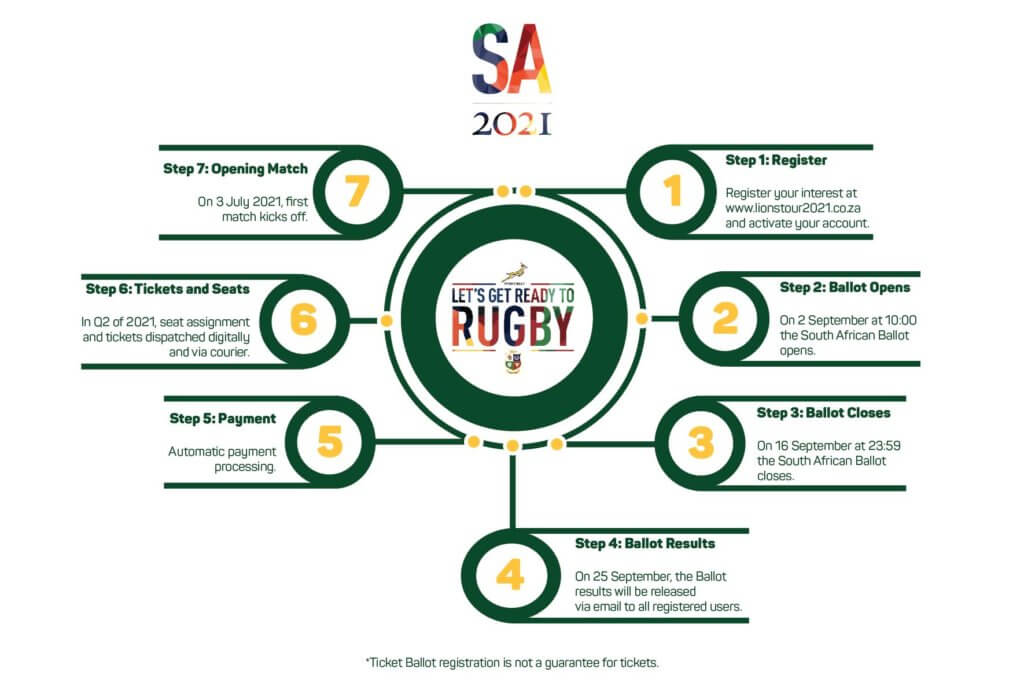 Once registered, the process is as follows:

← Previous Next →
Trending on moneyman.co.za
×
We only use cookies on this Site for particular features to work, the cookies do not collect and/or store any personal information about you.Ok