Hastings Boys High finished top of the pile in New Zealand in 2017, but were not included in the inaugural World Schools’ Festival.

Leading into 2018, the usual excitement surrounding the schoolboy rugby season is further elevated by the up coming World School’s Festival, dubbed as the “Schools’ World Cup”, to be hosted at Paarl Boys High in celebration of their 150th anniversary.

The competition, to be compromised of five pools and 20 competing schools, see ten South African schools in hosts, Paarl Boys High, Afrikaanse Seuns, Boland Landbou, Glenwood, Monument, Grey College, Outeniqua, Oakdale, Paarl Gymnasium and Hilton College taking part. Making up the rest will be Hatpury College and Millfield School from England, a combined African and Pacific Islands side and two regional teams from Mendoza and then either the USA or Italy.

This leaves the next biggest collective representation other than South Africa to New Zealand, as they will have Hamilton Boys’ High, Christchurch Boys’ High, Otago Boys’ High and Napier Boys’ High competing. Whilst these sides all boast impressive 2017 records and rich rugby histories, an interesting omission is that of Hastings Boys’ High who actually beat Hamilton Boys’ to end top of the New Zealand school boy rankings in 2017, according to hstop200.com

Not only did Hastings finish ranked one in the country, they also completed their 2017 season unbeaten and provided the New Zealand Schools side with six players.

The New Zealand schools competition, working off more of a pool base system than that of the South African league system (as can be seen on schoolboyrugby.co.za) sees an actual final take place to determine the number one spot.

Whilst Paarl Boys High, South Africa’s undeniable number one side will be looking to continue for a fourth unbeaten season whilst measuring themselves against other international bests, it is a pity that they will not be finding themselves head to head with New Zealand’s top 2017 team.

Yet, the competition still promises a great assemblage of talent and excitement, being spearheaded by former Bok coach Heyneke Meyer and heavily punted by Boshaai first XV coach Sean Erasmus. With the aim not only to celebrate the school’s 150th anniversary but also to make possible international school’s rivalries in what will be a refreshing change to the usual school’s season and will hopefully become a regularity world wide, should the inaugural one be a success. 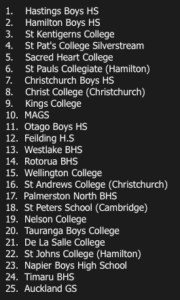